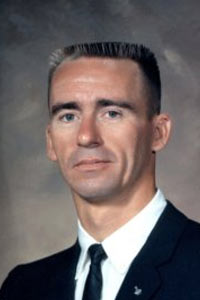 Born 16 March 1932, in Creston, Iowa. Grown children, Brian and Kimberly. Walter is an avid sports enthusiast and is particularly interested in tennis, hunting, and sports cars.

Awarded the NASA Exceptional Service Medal and Navy Astronaut Wings; co-recipient of the AIAA 1969 Haley Astronautics Award; presented the UCLA Alumni Professional Achievement Award for 1969 and the National Academy of Television Arts and Sciences Special Trustee Award (1969); the American Legion Medal of Valor, and Outstanding American Award of the American Conservative Union, 1975; named to the International Space Hall of Fame and Houston Hall of Fame; Judge for the 1984 Rolex Awards for Enterprise. Listed in Who's Who in America, the world, Aviation and other similar publications.

Cunningham joined the Navy in 1951 and began his flight training in 1952. In 1953 he joined a Marine squadron and served on active duty with the United States Marine Corps until August 1956 and in the Marine Corps Reserve program until 1975. His present rank is Colonel, USMCR (Retired).

He worked as a scientist for the Rand Corporation prior to joining NASA. While with Rand, he worked on classified defense studies and problems of the earth's magnetosphere.

He has accumulated more than 4,500 hours of flying time, including more than 3,400 in jet aircraft and 263 hours in space.

Mr. Cunningham was one of the third group of astronauts selected by NASA in October 1963.

On 11 October 1968, he occupied the lunar module pilot seat for the eleven-day flight of Apollo 7--the first crewed flight test of the third generation United States spacecraft. With Walter M. Schirra, Jr., and Donn F. Eisele, Cunningham participated in and executed maneuvers enabling the crew to perform exercises in transposition and docking and lunar orbit rendezvous with the S-IVB stage of their Saturn IB launch vehicle; completed eight successful test and maneuvering ignitions of the service module propulsion engine; measured the accuracy of performance of all spacecraft systems; and provided the first live television transmission of onboard crew activities. The 263-hour, four-and-a-half million mile shakedown flight was successfully concluded on October 22, 1968, with splashdown occurring in the Atlantic--some eight miles from the carrier ESSEX (only 3/10 of a mile from the originally predicted aiming point).

Mr. Cunningham's last assignment at the Johnson Space Center was Chief of the Skylab Branch of the Flight Crew Directorate. In this capacity he was responsible for the operational inputs for five major pieces of crewed space hardware, two different launch vehicles and 56 major on-board experiments that comprised the Skylab program. The Skylab program also utilized the first crewed systems employing arrays for electrical power, molecular sieves for environmental control systems and inertia storage devices for attitude control systems.

1979-1987 The Capital Group; Founder. A private investment firm catering to the particular needs of non-resident investors. The firm engaged in venture capital activities, addressing the financial needs of start-up and development stage companies and the acquisition of investment property.

1972-Present Investor and Entrepreneur. Residential and commercial real estate investor. Initiated a small business start-up with $2,000, which achieved revenues in excess of $1,000,000. Organizer of two national bank charters and outside, professional director of several technology companies.

1960-1963 The RAND Corporation; Physicist. Performed studies of the earth's magnetosphere and classified projects for the Department of Defense.