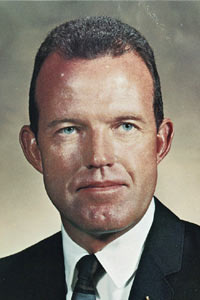 Born 6 March 1927 in Shawnee, Oklahoma. His interests included treasure hunting, archeology, racing, flying, skiing, boating, hunting and fishing. Gordon Cooper passed away on 4 October 2004, at his home in Ventura, California, at the age of 77.

Attended primary and secondary schools in Shawnee, Oklahoma and Murray, Kentucky; received a Bachelor of Science degree in Aeronautical Engineering from the Air Force Institute of Technology (AFIT) in 1956; recipient of an Honorary Doctorate of Science degree from Oklahoma City University in 1967.

Cooper, an Air Force Colonel, received an Army commission after completing three years of schooling at the University of Hawaii. He transferred his commission to the Air Force and was placed on active duty by that service in 1949 and given flight training.

His next assignment was with the 86th Fighter Bomber Group in Munich, Germany, where he flew F-84s and F-86s for four years. While in Munich, he also attended the European Extension of the University of Maryland night school.

He returned to the United States and, after two years of study at AFIT, received his degree. He then reported to the Air Force Experimental Flight Test School at Edwards Air Force Base, California, and, upon graduating in 1957, was assigned as an aeronautical engineer and test pilot in the Performance Engineering Branch of the Flight Test Division at Edwards. His responsibilities there included the flight testing of experimental fighter aircraft.

He logged more than 7,000 hours flying time--4,000 hours in jet aircraft. He had flown all types of Commercial and General aviation airplane and helicopters.

Colonel Cooper was selected as a Mercury astronaut in April 1959.

Cooper served as command pilot of the 8-day 120-revolution Gemini 5 mission which began on 21 August 1965. It was on this flight that he and pilot Charles Conrad established a new space endurance record by traveling a distance of 3,312,993 miles in an elapsed time of 190 hours and 56 minutes. Cooper also became the first man to make a second orbital flight and thus won for the United States the lead in man-hours in space by accumulating a total of 225 hours and 15 minutes.

He retired from the Air Force and NASA in 1970.