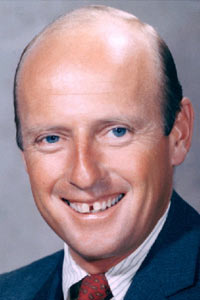 Born 2 June 1930, in Philadelphia, Pennsylvania. Died 8 July 1999, from injuries sustained in a motorcycle accident in Ojai, California. Conrad, who divorced his first wife, is survived by his wife Nancy, three sons and seven grandchildren. A son preceded him in death.

Attended primary and secondary schools at Haverford School in Haverford, Pennsylvania, and the Darrow School, New Lebanon, New York; received a bachelor of science degree in Aeronautical Engineering from Princeton University in 1953; an honorary master of arts degree from Princeton in 1966; an honorary doctorate of laws degree from Lincoln-Weslyan University in 1970, and an honorary doctorate of science degree from Kings college, Wilkes-Barre, Pennsylvania in 1971.

Fellow, American Astronautical Society; New York Academy of Science; American Institute of Aeronautics and Astronautics, and a Fellow of the Society of Experimental Test Pilots.

Following graduation from Princeton University in 1953, Mr. Conrad entered the Navy and became a naval aviator. He then attended the Navy Test Pilot School at Patuxent River, Maryland, where he was assigned as a Project Test Pilot. Mr. Conrad also served as a flight instructor and performance engineer at the Test Pilot School. After completing his tour of duty at Patuxent River, he served as instructor pilot in F4H Phantoms on VF-121 and was then assigned duty in VF-96 on board USS Ranger.

In December 1973, after serving 20 years (11 of which were as an astronaut in the space program), Mr. Conrad retired from the U.S. Navy to accept a position as Vice President - Operations and Chief Operating Office of American Television and Communications Corporation (ATC). At ATC, he was responsible for both the operation of existing systems and the national development of new cable television systems. In 1976, he resigned from ATC to accept the position of Vice President and consultant to McDonnell Douglas Corporation. In 1978, he became Vice President of marketing and was responsible for all commercial and military sales for Douglas Aircraft Company. Mr. Conrad then became Senior Vice President-Marketing in 1980. He was appointed as Senior Vice President Marketing and Product Support in 1982 and 1984, was named Staff Vice President of International Business Development for McDonnell Douglas Corporation.

In 1990, Mr. Conrad became Staff Vice President - New Business for McDonell Douglas Space Company, where he participated in research and development for the Space Exploration Initiative. Included for research and development in the Space Exploration Initiative are the construction of Space Station Freedom, the return to and colonization of the Moon, and the exploration of Mars. Mr. Conrad contributed his expertise on SSTO, the Single-Stage-To-Orbit and return space transportation system called the Delta Clipper. In 1993, Mr. Conrad became Vice President-Project Development.