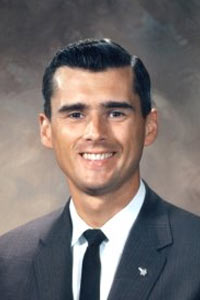 Born 15 February 1935 in Grand Rapids, Michigan. Died 27 January 1967, at NASA Kennedy Space Center, Florida, in the Apollo spacecraft fire. He is survived by his wife Martha and two children.

He served as safety officer and quality control officer for Heavy Photographic Squadron 62 at the Naval Air Station in Jacksonville, Florida.

In January 1963, he entered the Air Force Institute of Technology at Wright-Patterson Air Force Base, Ohio, to work on a Master of Science Degree in Reliability Engineering.

He logged more than 2,300 hours flying time, including more than 2,000 hours in jet aircraft.

Chaffee was one of the third group of astronauts selected by NASA in October 1963. In addition to participating in the overall training program, he was also tasked with working on flight control communications systems, instrumentation systems, and attitude and translation control systems in the Apollo Branch of the Astronaut office. On March 21, 1966, he was selected as one of the pilots for the AS-204 mission, the first 3-man Apollo flight.