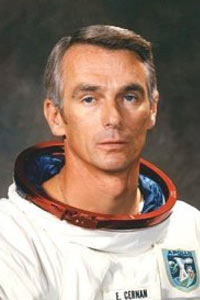 Born in Chicago, Illinois, on 14 March 1934. Married - Jan Nanna Cernan. They have three daughters, and one grandchild. His hobbies include love for horses, all competitive sports activities, including hunting, fishing and flying. He has died at the age of 82 on 16 January 2017.

Cernan, a retired United States Navy Captain, received his commission through the Navy ROTC Program at Purdue. He entered flight training upon graduation. He was assigned to Attack Squadrons 26 and 112 at the Miramar, California, Naval Air Station, and Subsequently attended the Naval Postgraduate School. He has logged more than 5000 hours flying time with more than 4800 hours in jet aircraft and over 200 jet aircraft carrier landings.

Captain Cernan was one of fourteen astronauts selected by NASA in October 1963.

He occupied the pilot seat alongside of command pilot Tom Stafford on the Gemini IX mission. During this 3-day flight which Began on 3 June 1966, the spacecraft achieved a circular orbit of 161 statute miles; the crew used three different techniques to effect rendezvous with the previously launched Augmented Target Docking Adapter; and Cernan, the second American to walk in space, logged two hours and ten minutes outside the spacecraft in extravehicular activities. The flight ended after 72 hours and 20 minutes with a perfect re-entry and recovery as Gemini IX landed within 1-1/2 miles of the prime recovery ship USS Wasp and 3/8 of a mile from the predetermined target.

On his second space flight, he was lunar module pilot of Apollo 10, May 18-26, 1969, the first comprehensive lunar-orbital qualification and verification flight test of an Apollo lunar module. He was accompanied on the 248,000 nautical sojourn to the moon by Thomas P. Stafford (spacecraft commander) and John W. Young (commander module pilot). In accomplishing all of the assigned objectives of this mission, Apollo 10 confirmed the operations performance, stability, and reliability of the command/service module and lunar module configuration during trans-lunar coast, lunar orbit insertion, and lunar module separation and descent to within 8 nautical miles of the lunar surface. The latter maneuver involved employing all but the final minutes of the technique prescribed for use in an actual lunar landing, and allowed critical evaluations of the lunar module propulsions systems and rendezvous of the landing radar devices in subsequent rendezvous and re-docking maneuvers. In addition to demonstrating that man could navigate safely and accurately in the moon's gravitational fields, Apollo 10 photographed and mapped tentative landing sites for future missions.

Cernan's next assignment was backup spacecraft commander for Apollo 14.

He made his third space flight as spacecraft commander of Apollo 17--the last scheduled crewed mission to the moon for the United States--which commenced at 11:33 P.M. (CST), 6 December 1972, with the first crewed nighttime launch, and concluded on December 19, 1972. With him on the voyage of the command module "America" and the lunar module "Challenger" were Ronald Evans (command module pilot) and Harrison H. (Jack) Schmitt (lunar module pilot). In maneuvering "Challenger" to a landing at Taurus-Littrow, located on the southeast edge of Mare Serenitatis, Cernan and Schmitt activated a base of operations from which they completed three highly successful excursions to the nearby craters and the Taurus mountains, making the Moon their home for over three days. This last mission to the moon established several new records for crewed space flight that include: longest crewed lunar landing flight (301 hours 51 minutes); longest lunar surface extravehicular activities (22 hours 6 minutes); largest lunar sample return (an estimated 115 kg (249 lbs.); and longest time in lunar orbit (147 hours 48 minutes). While Cernan and Schmitt conducted activities on the lunar surface, Evans remained in lunar orbit aboard the "America" completing assigned work tasks requiring geological observations, handheld photography of specific targets, and the control of cameras and other highly sophisticated scientific equipment carried in the command module SIM-bay. Evans also completed a 1-hour, 6-minute extravehicular activity on the transearth coast phase of the return flight, successfully retrieving three camera cassettes and completing a personal inspection of the equipment bay area. Apollo 17 ended with a splashdown in the Pacific Ocean approximately 0.4 miles from the target point and 4.3 miles form the prime recovery ship USS Ticoderoga.

Captain Cernan has logged 566 hours and 15 minutes in space-of which more than 73 hours were spent on the surface of the moon.

In September, 1973, Cernan assumed additional duties as Special Assistant to the Program Manager of the Apollo spacecraft Program at the Johnson Space Center. In this capacity, he assisted in the planning, development, and evaluation of the joint United States/Soviet Union Apollo-Soyuz mission, and he acted for the program manager as the senior United States negotiator in direct discussions with the USSR on the Apollo-Soyuz Test Project.

On 1 July 1976, Captain Cernan retired after over 20 years with the U.S. Navy. He concurrently terminated his formal association with NASA.

Captain Cernan was the second American to have walked in space having spanned the circumference of the world twice in a little more than 2-1/2 hours. He was one of the two men to have flown to the moon on two occasions, and as commander of the last mission to the moon, Apollo 17, had the privilege and distinction of being the last man to have left his footprints on the surface of the moon.

In September 1981, Captain Cernan started his own company, The Cernan Corporation, to pursue management and consultant interests in the energy, aerospace, and other related industries. Additionally he has been actively involved as a co-anchorman on ABC-TV's presentations of the flight of the shuttle.

In a recent acquisition, Captain Cernan became Chairman of the Board of Johnson Engineering Corporation. Johnson Engineering currently provides the National Aeronautics and Space Administration (NASA) with Flight Crew Systems Development with personnel located both on and off site at Johnson Space Center. Over the last seventeen years, Johnson Engineering has supported NASA in the design of crew stations for Space Shuttle, Spacelab, Space Station, Lunar Base and Mars Outpost. The company is directly involved with the operation of the 1-G trainers in Building 9A and B, as well as the Weightless Environment Training Facility in Building 29.