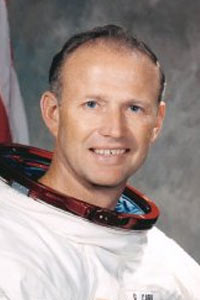 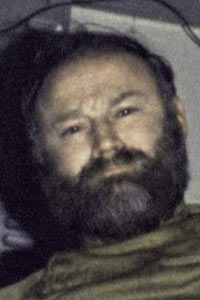 Born in Denver, Colorado, on 22 August 1932, but raised in Santa Ana, California, which he considers his hometown. Divorced. Remarried in 1979 to Dr. Patricia L. Musick. Three daughters and three sons. Recreational interests include snorkeling, swimming, bird hunting, fishing and woodworking.

When informed by NASA of his selection for astronaut training, he was assigned to the test directors section of Marine Air Control Squadron Three, a unit responsible for the testing and evaluation of the Marine Tactical Data System.

Carr began his military career in 1949 with the Navy, and in 1950 he was appointed a midshipman (NROTC) and enrolled in the University of Southern California. Upon graduation in 1954, he received his commission and subsequently reported to the U.S. Marine Corps Officers' Basic School at Quantico, Virginia. He received flight training at Pensacola, Florida, and Kingsville, Texas, and was then assigned to Marine All-Weather-Fighter-Squadron 114 where he gained experience in the F-9 and the F-6A Skyray. After postgraduate training, he served with Marine All-Weather-Fighter-Squadron 122, from 1962 to 1965, piloting the F-8 Crusader in the United States and the Far East. Other aircraft he has flown include the F-4, T-1, T-28, T-33, T-38, H-13, and ground effect machines.

Colonel Carr was one of the 19 astronauts selected by NASA in April 1966. He served as a member of the astronaut support crews and as CAPCOM for the Apollo 8 and 12 flights, and was involved in the development and testing of the lunar roving vehicle which was used on the lunar surface by Apollo flight crews.

Carr was commander of Skylab 4 (third and final crewed visit to the Skylab Orbital Workshop) launched 16 November 1973, and concluded 8 February 1974. This was the longest crewed flight (84 days, 1 hour, 15minutes) in the history of crewed space exploration to date. He was accompanied on the record-setting 34.5-million-mile flight by Dr. Edward G. Gibson (science pilot) and William R. Pogue (pilot). The crew successfully completed 56 experiments, 26 science demonstrations, 15 subsystem-detailed objectives, and 13 student investigations during their 1,214 revolutions of the earth. They also acquired extensive earth resources observation data using hand-held cameras and Skylab's Earth Resources Experiment Package camera and sensor array. They logged 338 hours of operations of the Apollo Telescope Mount, which made extensive observations of the sun's solar processes.

From February 1974 until March 1978, Colonel Carr and his Skylab 4 teammates shared the world record for individual time in space: 2,017 hours 15 minutes 32 seconds, and Carr logged 15 hours and 48 minutes in three EVAs outside the Orbital Workshop.

In mid-1977 Carr was named head of the design support group, within the astronaut office, responsible for providing crew support to such activities as space transportation system design, simulations, testing, and safety assessment, and for development of man/machine interface requirements.

Carr retired from the United States Marine Corps in September of 1975 and from NASA in June of 1977.

From 1977 until 1981 Carr was a Senior Vice President with Bovay Engineers, Inc., a Houston Consulting Engineering Firm.

He was a Senior Consultant on Special Staff to the President of Applied Research, Inc., Los Angeles, California, from 1981 to 1983. From 1983 until 1985 Carr was manager of the University of Texas 300-inch Telescope Project.

Carr founded CAMUS, Incorporated in 1984. The Family-owned Corporation provides technical support services in Zero-G Human Factors Engineering, Procedures Development, Operations Analysis, Training and Systems Integration. CAMUS was a major contributor as a technical support subcontractor to the Boeing Company in the crew systems design of the International Space Station. In addition, the corporation is involved in fine art production designed by his wife, Artist/Sculptor Pat Musick.