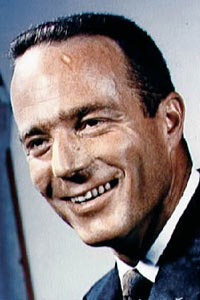 He was born in Boulder, Colorado, on 1 May 1925, the son of research chemist Dr. M. Scott Carpenter and Florence Kelso Noxon Carpenter. He attended the University of Colorado from 1945 to 1949 and received a bachelor of science degree in Aeronautical Engineering.

Carpenter was commissioned in the U.S. Navy in 1949. He was given flight training at Pensacola, Florida and Corpus Christi, Texas and designated a Naval Aviator in April, 1951. During the Korean War he served with patrol Squadron Six, flying anti-submarine, ship surveillance, and aerial mining, and ferret missions in the Yellow Sea, South China Sea, and the Formosa Straits. He attended the Navy Test Pilot School at Patuxent River, Maryland, in 1954 and was subsequently assigned to the Electronics Test Division of the Naval Air Test Center, also at Patuxent. In that assignment he flew tests in every type of naval aircraft, including multi- and single-engine jet and propeller-driven fighters, attack planes, patrol bombers, transports, and seaplanes.

Carpenter was selected as one of the original seven Mercury Astronauts on April 9, 1959. He underwent intensive training with the National Aeronautics and Space Administration (NASA), specializing in communication and navigation. He served as backup pilot for John Glenn during the preparation for America's first crewed orbital space flight in February 1962.

Carpenter flew the second American crewed orbital flight on 24 May 1962. He piloted his Aurora 7 spacecraft through three revolutions of the earth, reaching a maximum altitude of 164 miles. The spacecraft landed in the Atlantic Ocean about 1000 miles southeast of Cape Canaveral after 4 hours and 54 minutes of flight time.

On leave of absence from NASA, Carpenter participated in the Navy's Man-in the-Sea Project as an Aquanaut in the SEALAB II program off the coast of La Jolla, California, in the summer of 1965. During the 45-day experiment, Carpenter spent 30 days living and working on the ocean floor. He was team leader for two of the three ten-man teams of Navy and civilian divers who conducted deep-sea diving activities in a seafloor habitat at a depth of 205 feet.

He returned to duties with NASA as Executive Assistant to the Director of the Manned Spaceflight Center and was active in the design of the Apollo Lunar Landing Module and in underwater extravehicular activity (EVA) crew training.

In 1967, he returned to the Navy's Deep Submergence Systems Project (DSSP) as Director of Aquanaut Operations during the SEALAB III experiment. (The DSSP office was responsible for directing the Navy's Saturation Diving Program, which included development of deep-ocean search, rescue, salvage, ocean engineering, and Man-in-the-Sea capabilities.)

Upon retirement from the Navy in 1969,after twenty-five years of service, Carpenter founded and was chief executive officer of Sear Sciences, Inc., a venture capital corporation active in developing programs aimed at enhanced utilization of ocean resources and improved health of the planet. In pursuit of these and other objectives, he worked closely with the French oceanographer J.Y. Cousteau and members of his Calypso team. He has dived in most of the world's oceans, including the Arctic under ice.

As a consultant to sport and professional diving equipment manufacturers, he has contributed to design improvements in diving instruments, underwater breathing equipment, swimmer propulsion units, small submersibles, and other underwater devices.

Additional projects brought to fruition by his innovative guidance have involved biological pest control and the production of energy from agricultural and industrial waste. He has also been instrumental in the design and improvement of several types of waste handling and waste-transfer equipment.

Carpenter continues to apply his knowledge of aerospace and ocean engineering as a consultant to industry and the private sector. He lectures frequently in the U.S. and abroad on the history and future of ocean and space technology, the impact of scientific and technological advance on human affairs, and man's continuing search for excellence. An avid skier, he spends much of his free time on the slopes in his home of Vail, Colorado, his home for the past fifteen years.

He has appeared as television spokesman for many major corporations, including General Motors (Oldsmobile), standard Oil of California, Nintendo, and Atari; and has hosted and narrated a number of television documentaries. He has also served as actor/consultant to the film industry in the fields of space flight, oceanography, and the global environment.

He has written two novels, both dubbed “underwater techno-thrillers.” The first was entitled “The Steel Albatross.” The second, a sequel, was called “Deep Flight.” His memoir, “For Spacious Skies” which he co-authored with his daughter, Kristen Stoever, was published by Harcourt in January 2003.