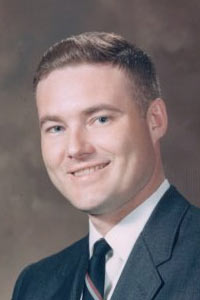 Born 25 September 1934, in Memphis, Tennessee. He is married and has two grown children, a son and a daughter. He enjoys swimming and golf. Died 11 August 2008.

He entered active duty with the Navy in June 1957, and received his flight training at Kingsville, Texas. From March 1959 to November 1960, he flew F-3 Demons while assigned to VF-114 at the Naval Air Station in Mirimar, California, flying the F-3 Demon and F-4 Phanton II. He also served three tours on WESTPAC cruises aboard the carriers USS Ranger, USS Hancock, and USS Kitty Hawk.

He graduated from the U.S. Naval Test Pilot School in February 1964, and was named "outstanding student" of his class. Bull was assigned as a project test pilot in the Carrier Suitability Branch at the Naval Air Test Center at Patuxent River, Maryland, March 1964 to April 1966.

Resigned from astronaut duty in 1968 due to pulmonary disease, returned to Stanford University graduate school, and received a Ph.D. in 1973.

At NASA Ames Research Center, from 1973-1985, he conducted simulation and flight test research in advanced flight systems for both helicopters and fixed-wing aircraft. From 1986 until his retirement in 1989, he managed NASA wide research programs in autonomous systems technology for space applications. He currently provides consulting services for aerospace research and technology programs.