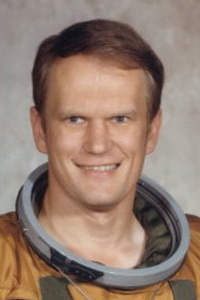 Born in New York, New York, on 23 December 1937. Married to the former F. Dianne Welsh of Denver, Colorado. They have a daughter and a son.

Bobko, an Air Force Colonel, was a member of the first graduating class of the Air Force Academy. Subsequent to receiving his commission and navigator rating, he attended pilot training at Bartow Air Base, Florida, and Vance Air Force Base, Oklahoma. He completed his flight training and received his wings in 1960.

Bobko was a member of the astronaut support crew for the Apollo-Soyuz Test Project (ASTP). This historic first international, crewed space flight was completed in July 1975. Subsequently, he was a member of the support crew for the Space Shuttle Approach and Landing Tests conducted at Edwards Air Force Base, California. He served alternately as CAPCOM and prime chase pilot during these Approach and Landing Test (ALT) flights.

In preparation for the first flight of Columbia ( STS-1) Colonel Bobko served as the lead astronaut in the test and checkout group at Kennedy Space Center.

In 1988, Bobko retired from NASA and the Air Force to join the firm of Booz Allen & Hamilton Inc., in Houston, Texas. At Booz Allen he was a principal and managed efforts dealing with human space flight. His areas of emphasis were: high performance training simulation, hardware and software systems engineering, spacecraft checkout and testing, space station development and program integration.

In 2000, Bobko joined SPACEHAB, Inc in Houston, Texas and was Vice President for Strategic Programs. He led an organization which developed concepts, processes and hardware for future spaceflight applications.

In 2005, Bobko joined SAIC where he is currently the program manager for support of the NASA Ames Simulation Laboratories (SimLabs). SimLabs is comprised of three unique Flight Simulators, an Air Traffic Control Radar Simulator and a High Fidelity Air Traffic Control Tower Simulator. These world-class simulation facilities support government as well as private industry in a wide array of applications.

Colonel Bobko was pilot for STS-6, which launched from Kennedy Space Center, Florida, on 4 April 1983. During this maiden voyage of the spacecraft Challenger, the crew deployed a large communications satellite (TDRS) and the rocket stage (IUS) required to boost it to geosynchronous orbit. The STS-6 crew also conducted the first shuttle spacewalk (EVA) and additionally conducted numerous other experiments in materials processing and the recording of lightning activities from space. There were also three Getaway Specials activated on the flight. After 120 hours of orbital operations STS-6 landed on the concrete runway at Edwards Air Force Base, California, on 9 April 1983.

On his second mission Colonel Bobko was the commander of STS-51D which launched from Kennedy Space Center, Florida, on 12 April 1985. The mission was to deploy two communications satellites, perform electrophoresis and echocardiograph operations in space, in addition to accomplishing other experiments. When one of the communications satellites malfunctioned, a daring attempt was made to activate the satellite which required an additional EVA, rendezvous, and operations with the remote manipulator arm. After 168 hours of orbital operations Discovery landed on Runway 33 at Kennedy Space Center on 19 April 1985.

Colonel Bobko was next commander of STS-51J, the second Space Shuttle Department of Defense mission, which launched from Kennedy Space Center, Florida, on 3 October 1985. This was the maiden voyage of the Atlantis. After 98 hours of orbital operations, Atlantis landed on Edwards Air Force Base Lakebed Runway 23 on 7 October 1985.