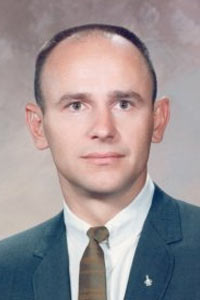 Graduated from Paschal High School in Fort Worth, Texas; received a bachelor of science degree in aeronautical engineering from the University of Texas in 1955; awarded an honorary doctorate of science from Texas Wesleyan College in 1972; presented an honorary doctorate of engineering science degree from the University of Akron (Ohio) in 1974.

Fellow of the American Astronautical Society; member of the Society of Experimental Test Pilots.

Alan Bean, a Navy ROTC Student at Texas, was commissioned upon graduation in 1955. After completing flight training, he was assigned to a jet attack squadron in Jacksonville, Florida. After a four-year tour of duty, he attended the Navy Test Pilot School, then flew as a test pilot on several types of naval aircraft.

Alan Bean was one of the third group of astronauts named by NASA in October 1963. He served as backup astronaut for the Gemini 10 and Apollo 9 missions.

On his next assignment, Captain Bean was backup spacecraft commander of the United States flight crew for the joint American-Russian Apollo-Soyuz Test Project.

Captain Bean has logged 1,671 hours and 45 minutes in space–of which 10 hours and 26 minutes were spent in EVAs on the moon and in earth orbit. Captain Bean has flown 27 types of military aircraft as well as many civilian airplanes. He has logged more than 7,145 hours flying time–including 4,890 hours in jet aircraft. Captain Bean retired from the Navy in October 1975 but continued as head of the Astronaut Candidate Operations and Training Group within the Astronaut Office in a civilian capacity.

Bean resigned from NASA in June 1981 to devote his full time to painting. He said his decision was based on the fact that, in his 18 years as an astronaut, he was fortunate enough to visit worlds and see sights no artist's eye, past or present, has ever viewed firsthand and he hopes to express these experiences through the medium of art. He is pursuing this dream at his home and studio in Houston.