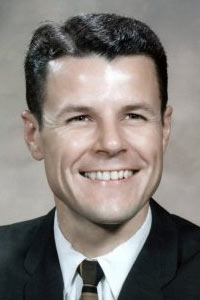 He attended Ohio State University from 1950 to 1952, and Texas Technological College from 1958 to 1960. He received a Bachelor of Science Degree in Electrical Engineering with honors from Texas Tech; He had done graduate work at University of Southern California.

Bassett was an Air Force Captain. He graduated from the Aerospace Research Pilot School and the Air Force Experimental Pilot School.

He served as an experimental test pilot and engineering test pilot in the Fighter Projects Office at Edwards Air Force Base, California.

Bassett was one of the third group of astronauts named by NASA in October 1963. In addition to participating in the overall astronaut-training program, he had specific responsibilities pertaining to training and simulators. On 8 November 1965, he was selected as pilot of the upcoming Gemini 9 mission. He died on 28 February 1966, in the crash of a T-38 jet.