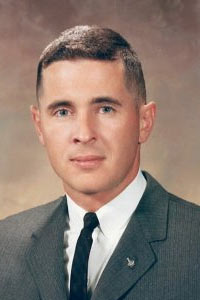 Received a bachelor of science degree from the United States Naval Academy in 1955 and a master of science degree in Nuclear Engineering from the Air Force Institute of Technology at Wright-Patterson Air Force Base, Ohio, in 1962. Completed the Harvard Business School Advanced Management Program in 1979.

Anders was commissioned in the air Force after graduation from the Naval Academy and served as a fighter pilot in all-weather interception squadrons of the Air Defense Command and later was responsible for technical management of nuclear power reactor shielding and radiation effects programs while at the Air Force Weapons Laboratory in New Mexico.

In 1964, Anders was selected by the National Aeronautics and Space Administration as an astronaut with responsibilities for dosimetry, radiation effects and environmental controls. He was backup pilot for the Gemini XI, Apollo 11 flights, and was lunar module pilot for Apollo 8 -- the first lunar orbit mission in December 1968. He has logged more than 6,000 hours flying time.

From June 1969 to 1973 he served as Executive Secretary for the National Aeronautics and Space Council, which was responsible to the President, Vice President and Cabinet-level members of the Council for developing policy options concerning research, development, operations and planning of aeronautical and space systems.

On 6 August 1973, Anders was appointed to the five-member Atomic Energy Commission where he was lead commissioner for all nuclear and non-nuclear power R&D. He was also named as U. S. Chairman of the joint US/USSR technology exchange program for nuclear fission and fusion power.

Following the reorganization of national nuclear regulatory and developmental activities on 19 January 1975, Anders was named by President Ford to become the first Chairman of the newly established Nuclear Regulatory Commission responsible for nuclear safety and environmental compatibility. At the completion of his term as NRC Chairman, Anders was appointed United States Ambassador to Norway and held that position until 1977.

Anders left the federal government after 26 years of service and after briefly serving as a Fellow of the American Enterprise Institute he joined the General Electric Company in September 1977 as Vice President and General Manager of the Nuclear Products Division in San Jose, California. In this position he was responsible for the manufacture of nuclear fuel, reactor internal equipment, and control and instrumentation for GE boiling water reactors at facilities located in San Jose and Wilmington, North Carolina. In addition, he had responsibility for the GE partnership arrangement with Chicago Bridge and Iron for the manufacture of large steel pressure vessels in Memphis, Tennessee. In August 1979, Anders was placed on special assignment to attend the Harvard Business School's Advanced Management Program.

On 1 January 1980, Anders was appointed General Manager of the General Electric Aircraft Equipment Division with headquarters in Utica, New York. With more than 8500 employees in five plant locations in the Northeastern U.S., the Aircraft Equipment Division products include aircraft flight and weapon control systems, cockpit instruments, aircraft electrical generating systems, airborne radars and data processing systems, electronic countermeasures, space command systems, and aircraft/surface multi-barrel armament systems. In 1984, he left GE to join Textron as Executive Vice President-Aerospace, moving to Senior Executive Vice President-Operations in 1986. He was also a consultant to the Office of Science and Technology Policy and was a member of the Defense Science Board & the NASA Advisory Council, and is a retired Major General in the USAF Reserve.

Mr. Anders was made Vice Chairman of the General Dynamic Corporation for 1990 and was made Chairman & Chief Executive Office 1 January 1991. In 1993 he retired as an employee of the corporation but remained Chairman of the Board until May of 1994 when he fully retired from company service.