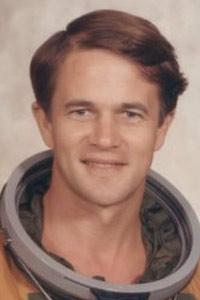 Attended Mills School and is a graduate of Crawfordsville High School in Indiana; received a bachelor of arts degree in math-physics from DePauw University in 1959, and a master of science degree and a doctor of philosophy degree in physics from Yale University in 1961 and 1965, respectively.

Winner of a Fulbright Scholarship to Germany (1959-1960), the Outstanding Flying Award, Class 69-06, Vance Air Force Base (1969), two NASA Group Achievement Awards (1971and 1974) in recognition of contributions to the Apollo 15 Lunar Traverse Planning Team and for subsequent work on the Outlook for Space Study Team; presented the 1972 Yale Science and Engineering Association Award for Advancement of Basic and Applied Science, the DePauw University Distinguished Alumnus Award (1972), a NASA Exceptional Scientific Achievement Medal (1973), a NASA exceptional Service Medal (1978), and a NASA Superior Performance Award (1975 and 1981), and honorary doctor of science from DePauw University (1983), and the Komarov Diploma from the Federation Aeronautique Internationale

He has logged more than 3,000 hours flying time in jet aircraft.

Dr. Allen was selected as a scientist-astronaut by NASA in August 1967. He completed flight training at Vance Air Force Base, Oklahoma. He served as mission scientist while a member of the astronaut support crew for Apollo 15 and served as a staff consultant on science and technology to the President's Council on International Economic Policy.

From August 1975 to 1978, Dr. Allen served as NASA Assistant Administrator for Legislative Affairs in Washington, D.C. Returning to the Johnson Space Center in 1978, as a senior scientist astronaut, Dr. Allen was assigned to the Operations Mission Development Group. He served as a support crew member for the first orbital flight test of the Space Transportation System and was the entry CAPCOM for this mission. In addition, in 1980 and 1981, he worked as the technical assistant to the director of flight operations. He was a mission specialist on STS-5 (November 11-16, 1982) and STS-51A (November 8-16,1984) and has logged a total of 314 hours in space. He left NASA in 1985.

STS-5 was the first fully operational flight of the Shuttle Transportation System, which launched from Kennedy Space Center, Florida, on 11 November 1982. The crew aboard Columbia included Vance D. Brand (spacecraft commander), Col. Robert F. Overmyer (pilot), and Dr. William B. Lenoir (mission specialist). STS-5, the first mission with a crew of four, clearly demonstrated the Space Shuttle as fully operational by the successful first deployment of two commercial communications satellites from the Orbiter's payload bay. The mission also marked the first use of the Payload Assist Module (PAM-D), and its new ejection system. Numerous flight tests were performed throughout the mission to document Shuttle performance during launch, boost, orbit, atmospheric entry and landing phases. STS-5 was the last flight to carry the Development Flight Instrumentation (DFI) package to support flight testing. A Getaway Special, three Student Involvement Projects, and medical experiments were included on the mission. The crew successfully concluded the 5-day orbital flight of Columbia with the first entry and landing through a cloud deck to a hard-surface runway and demonstrated maximum braking. STS-5 completed 81 orbits of the Earth in 122 hours before landing on a concrete runway at Edwards Air Force Base, California, on 16 November 1982.